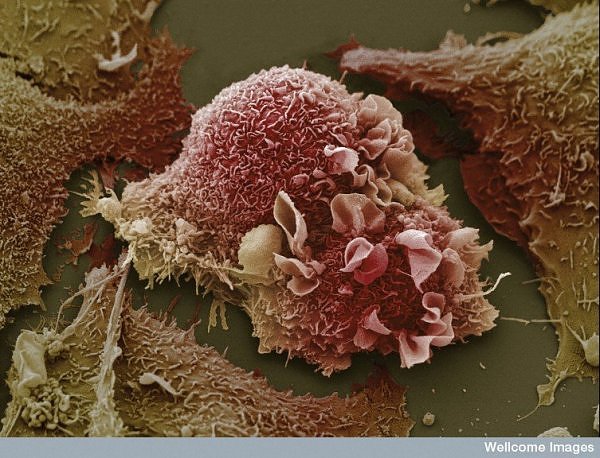 8 HPV TYPES CAUSE 90% OF CERVICAL CANCER

October 28, 2010 — A massive multinational cervical cancer study described as "the benchmark for all time" has confirmed that 8 human papillomavirus (HPV) types cause more than 90% of all cervical cancers worldwide, and that HPV 16, 18, and 45 cause 94% of cervical adenocarcinomas.

The study was published online October 15 in the Lancet Oncology.

The research team, led by Silvia de Sanjose, MD, from Institut Català d'Oncologia-Catalan Institute of Oncology in Barcelona, Spain, concludes that "HPV types 16, 18, 31, 33, 34, 45, 52, and 58 should be given priority when the cross-protective effects of current vaccines are assessed and for formulation of recommendations for the use of second-generation polyvalent HPV vaccines."

Maurie Markman, MD, vice president of patient oncology services and national director for medical oncology at Cancer Treatment Centers of America, in Philadelphia, Pennsylvania, told Medscape Medical News: " I suspect the next generation of cervix cancer vaccines will specifically include each of the 8 HPV types noted in this paper, since this will cover 90% of the cases of cervix cancer."

Currently, the 2 HPV vaccines on the market — Gardasil (Merck & Co) and Cervarix (GlaxoSmithKline) — protect against subtypes 16 and 18; together, these cause 70% of cervical cancer. In addition, Gardasil offers protection against 2 other subtypes (HPV 6 and 11) that cause genital warts.

However, there has been some evidence that the current vacciness might offer at least some cross-protection against other cervical cancer subtypes. A Merck research team, led by Janine Bryan, PhD, reported that Gardasil immunization induces antibodies capable of neutralizing HPV 45 in vitro (Hum Vaccin. 2007;3:109-115). The cross-reactive, cross-neutralizing antibodies were generated at reduced titers, compared with vaccine-specific types, and the researchers emphasized that antibody titers required for cross-protection against nonvaccine types were not known at that time.

There are also conclusions from the latest study on HPV screening. The researchers note that "our results also suggest that type-specific, high-risk HPV-DNA-based screening tests and protocols should focus on HPV types 16, 18, and 45."

HPV 16, 18, and 45 are the most common types, and occur at a much younger age than other high-risk HPV genotypes. As such, these 3 HPV types should be the focus of future type-specific HPV screening, say the authors.

The researchers in this retrospective cross-sectional study collected samples from 10,575 cases of invasive cervical cancer diagnosed between 1949 and 2009 from 38 countries in Europe, North America, central South America, Africa, Asia, and Oceania. Polymerase chain reaction and DNA testing were used to identify the HPV genotype present in these tissue samples. They found that 8977 (85%) were positive for HPV DNA.

Across 5 continents and despite a wide variety of screening programs, women infected with HPV types 16, 18, and 45 were diagnosed with cervical cancers an average of 4 years earlier than women with other high-risk HPV types. The researchers also found that HPV 16, 18, and 45 were more likely to be integrated into the human genome than other HPV types.

The authors recommend that, in light of the early presentation of cases of invasive cervical cancer that were positive for HPV 45, this genotype should be considered in type-specific screening protocols, and women who are positive should be offered closer surveillance.

The authors conclude that "this international effort . . . reinforces the rationale for prevention of cervical cancer through use of existing vaccines."

In an editorial comment that accompanied the study, Cosette Wheeler, MD, from the University of New Mexico Health Sciences Center, in Albuquerque, suggests that the HPV-negative cases were likely due to artifacts such as tissue inadequacy, nucleic-acid degradation in formalin-fixed tissues, low viral loads, and potential misdiagnosis, in part due to the absence of staging data and of stains to exclude samples of endometrial origin.

"Although a minor fraction of invasive cervical cancer might still arise, independent of HPV, studies of fresh-frozen cancer tissues suggest that this is only a small percentage of all invasive cancers," Dr. Wheeler writes.

Dr. Wheeler concludes that "the overall HPV prevalence data confirm the inclusion of specific pools of high-risk HPV in routine cervical screening and in the next generation of HPV vaccines."